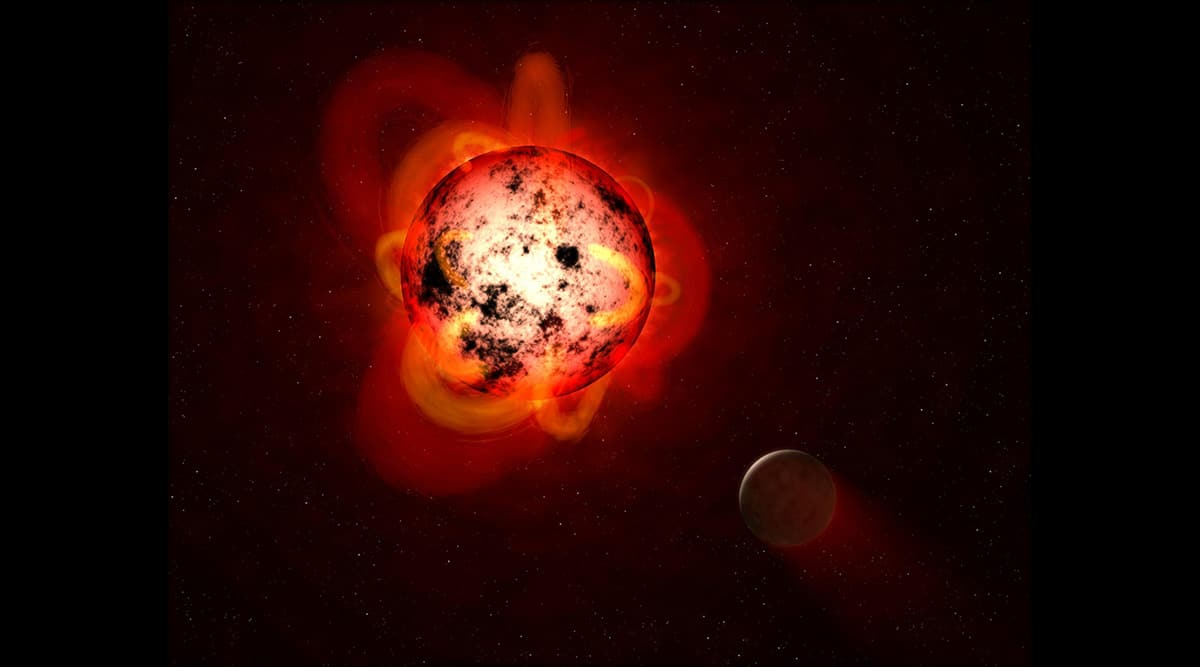 Red dwarf stars or M dwarf stars are the most common type of stars in the universe. Recent research into an Earth-like planet orbiting such a star discovered that it has no atmosphere. According to the researchers behind the study, this discovery could create a major shift in the way we look for alien life.

Since these stars are so common, the discovery of GJ 1252b—the planet in question—having no atmosphere could mean that a large number of planets orbiting such stars would probably not be able to host any life. This Earth-like planet is slightly larger than ours and is much close to its star than we are to our Sun. This makes GJ 1252b intensely hot and pretty much inhospitable.

“The pressure from the star’s radiation is immense, enough to blow a planet’s atmosphere away,” said Michelle Hill, UC Riverside astrophysicist and co-author of the study published in The Astrophysical Journal Letters, in a press statement.

How planets lose their atmosphere

The Earth also loses some of its atmosphere over time due to the intense radiation from the Sun. But on our planet, a combination of volcanic emissions and other carbon cycling processes replenishes what is lost for the most part. But for a planet like GJ 1252b, which has a much tighter orbit with its star, it is nearly impossible to replenish the atmosphere being lost.

This is exactly what happens with Mercury in our solar system. The planet closest to the sun does technically have an atmosphere but it is an extremely thin one made up of atoms that the sun’s radiation blasted off its surface. The extreme heat on Mercury means that most of these atoms escape into space.

How do scientists know GJ 1252b doesn’t have an atmosphere

A secondary eclipse is when a planet passes behind a star, blocking the light from the planet and the light that is reflected from its star. Astronomers measured infrared radiation from GJ 1252b when it was obscured by such an eclipse.

This infrared radiation revealed that the planet’s temperatures are scorching hot during its daytime, tipping the scales at around 1227 degrees Celsius. This is hot enough to melt all the gold, silver and copper on the planet. Based on this heat and the low surface pressure on the planet, scientists concluded that there is no atmosphere there.

“The planet could have 700 times more carbon than Earth has, and it still wouldn’t have an atmosphere. It would build up initially, but then taper off and erode away,” said Stephen Kane, UCR astrophysicist and study co-author, in a press statement.

The chances of a habitable planet

All of the above factors, combined with the fact that M dwarfs tend to have more flares and activity than the sun, means that it is extremely unlikely that planets closely surrounding such planets can hold on to their atmosphere.

But Earth’s solar neighbourhood has around 5,000 stars, and most of them are M dwarf stars. But even if M dwarfs are ruled out, there are still around 1,000 Sun-like stars that could host habitable planets. But M dwarf stars cannot be ruled out completely.

“If a planet is far enough away from an M dwarf, it could potentially retain an atmosphere. We cannot conclude yet that all rocky planets around these stars get reduced to Mercury’s fate. I remain optimistic,” added Hill.