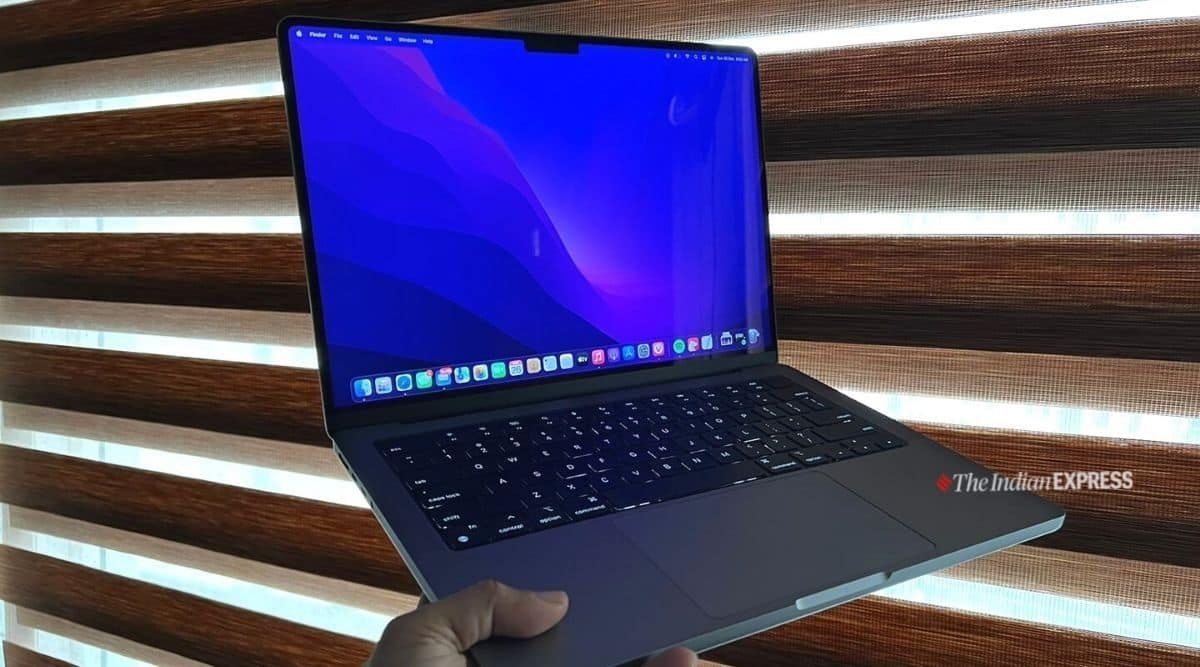 Ever since I became a Mac user many years back, an enduring memory of winters in Delhi has been the feel of the cold aluminium against my lap every morning. Even as I progressed from my first MacBook Air to newer, more powerful devices, this feeling of cold metal on my skin is something that reminds me of the promise of working on a Mac. These past few weeks, this feeling has got an upgrade with the new MacBook Pro powered by Apple’s new M1 Pro chipsets.

The latest MacBook Pro has got a design change too, something many would consider as more retro than futuristic. Even I was not sure initially when I started using the MacBook, especially the four rubber hooves which did not feel that contemporary. The edges and curves are much softer now and as you run your hands along the sides you realise how the fans have been packed in so well into the curves below the body.

The rubber hooves manage to help with heat dissipation, and the “MacBook Pro” embossing in the centre is a nice touch for avid fans. (Image credit: Nandagopal Rajan/Indian Express)

The hooves seem to be a way to let this heat dissipate easily without getting deflected by the surface the MacBook is resting on. Also, the MacBook Pro embossing on the bottom seems to be a great touch, especially to make the fans feel happy. Overall, the new MacBook Pro looks like something bigger, but that’s an illusion. It is just 1.6 kg heavy which is actually on the lighter side for something with these specifications.

If you are into photography or video editing it will be hard to miss the punch that the new display on the MacBook Pro packs. The 14.2-inch Liquid Retina XDR display (3024x1964p) packs in eye-popping colours and is bright enough for you to work even in the bright winter sun. But there is more. Apple has added its ProMotion adaptive refresh rate technology in the screen and it can switch up to 120Hz if you are playing a game on Steam for instance. 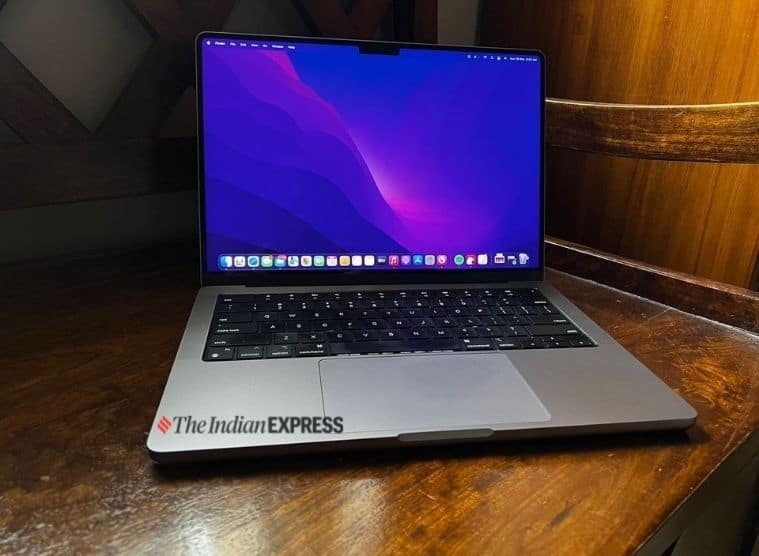 The 14.2-inch Liquid Retina XDR display (3024x1964p) packs in eye-popping colours and is bright enough for you to work even in the bright winter sun. (Image credit: Nandagopal Rajan/Indian Express)

I shifted my entire work at home to the new MacBook Pro over the past few weeks. I was mostly on an older MacBook Pro before and yes I could make out this was faster. It is not as if the older one was slower, but somewhere the new one responded a tad bit better.

But there was one aspect which was way better than before and that was the new Magic keyboard. It was a pleasure typing on this backlit keyboard which offered a bit of feedback which made this feel much more natural. The keys are well laid out with the perfect spacing even in the 14-inch version which I was reviewing. The trackpad is also very good, offering precision control for selections. The TouchID is integrated in the right top corner of the keyboard. This is also extremely responsive for when you want to quickly resume work. But I noticed one quirk too. At times when you use the TouchID with a little bit of pressure, you get the prompt asking if you want to switch off. I have not faced this on another keyboard with the Apple TouchID integration.

While this MacBook Pro is powered by Apple’s new M1 Pro, there was no occasion where I could not do something or use software because it was not compatible with the new chip. For instance, I downloaded Vivaldi which is gradually becoming my go-to browser for a lot of specific work like tracking news across websites and it set up smoothly. The same happened with more other stuff I had to load for work. This is a change in the past year when some software was not initially compatible with M1. One big change Apple has incorporated in the new MacBook Pro is in the ports – bringing back the card reader as well as an HDMI port. (Image credit: Nandagopal Rajan/Indian Express)

One big change Apple has incorporated in the new MacBook Pro is the ports. Apple has brought back a card reader as well as an HDMI port in 2021 in a departure from the path it had taken a few years back. It seems Apple has taken cognisance of all the feedback it has got from consumers over the past few years about having to spend on getting adapters to use the MacBook effectively. And while there is a MagSafe 3 charger too, this one can be easily charged up using the USB-C ports too and so you really don’t have to carry the charger everywhere you go. I have a feeling the extra thickness of this device is also a bid to accommodate these ports.

There is another game-changer here. The MacBook Pro now packs a 1080p camera which other laptop manufacturers have struggled to bring in despite the pandemic. The camera makes you stand out in any Zoom call or Google Meet and could actually have an impact on your career by the time we are back in the office like before.

The 14-inch MacBook Pro is now the most compact professional-grade computer you can buy. It is not much larger than a MacBook Air, but still performs almost as well as an iMac. If you are a power user with the need to run powerful software that will push any computer at regular intervals, then this is the device for you. Also, for creative professionals, the stunning new display is going to make a huge difference too. Yes, the MacBook Pro 2021 is expensive with starting prices of the 14-inch version priced upwards of Rs 1,94,900. But then you are equipping yourself to work from the home, office and everywhere else for the next few years.