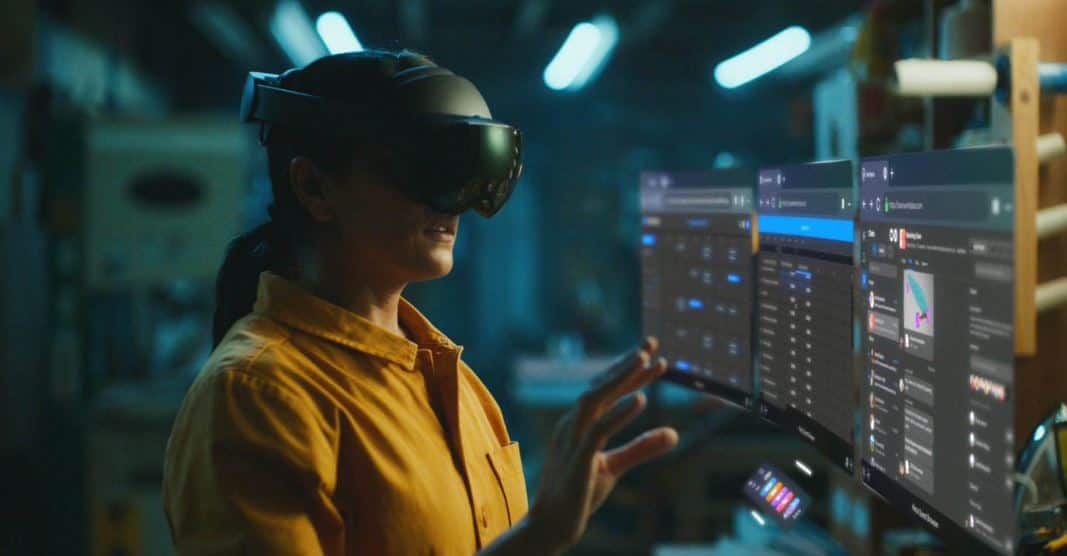 Meta Platforms Inc. unveiled its newest virtual-reality headset on Tuesday, a foray into the world of high-end VR devices designed to entice creators and working professionals to adopt Mark Zuckerberg’s vision for an immersive digital future.

The Meta Quest Pro is the company’s latest offering in a product line previously branded as Oculus. The Quest Pro includes a number of technological advancements from the company’s Quest 2 headset, which was launched in late 2020.

The new headset is also much pricier than its predecessor — it will cost $1,500, or three times the price of the Quest 2, in part because the company is targeting more serious working professionals. With the new device, Facebook parent Meta is seeking to transcend the notion that VR is primarily the realm of gamers, an effort to broaden its audience. Meta’s Quest 2 headset has sold an estimated 15 million units.

“It’s work-focused,” Meta Chief Executive Officer Zuckerberg told a small group of reporters in late September. “The ideal customers for this [are] gonna be either people who just want the highest-end VR device — so enthusiasts, prosumer type folks — or people who are trying to get work done.”

Some of the Quest Pro’s new features are built for this work-focused audience, and would be particularly useful for people taking meetings in VR while working remotely. The device includes face- and eye-tracking, which can be used to humanize avatars so that conversations in VR feel more personal. It also has what Meta calls a “full-color mixed reality experience,” which uses cameras on the outside of the headset to let people see the world around them and overlay graphics while wearing the device. (The Quest 2 also has this mixed reality feature, but only in black and white.)

Meta is also launching new “self-tracking” controllers alongside its new headset, which means each controller has built-in sensors that can “track their position in 3D space independent of the headset,” according to Meta’s blog post about the product.

Meta and Zuckerberg have been teasing the Quest Pro for months, and many of the gadget’s details leaked ahead of Tuesday’s announcement at the company’s annual Connect conference. Still, Meta’s research in developing virtual and augmented reality headsets is key to plans for the so-called metaverse, an immersive version of the internet where Zuckerberg hopes people will eventually work and play.

Someday users may access the metaverse as digital avatars through devices like the Quest Pro, and eventually through augmented reality glasses intended to look like ordinary reading spectacles. That vision is still far off — and costing Meta tens of billions of dollars in the interim. The company said investments in its Reality Labs division, which is responsible for building the metaverse, cut operating profits by $10 billion in 2021. Meta’s shares have tumbled more than 60% this year.

For now Meta is promoting the Quest Pro as an important tool for working remotely, and is teaming up with Microsoft Corp. to offer Microsoft Teams and Microsoft 365 office-productivity software on the new devices. Microsoft CEO Satya Nadella appeared on video alongside Zuckerberg Tuesday announcing the partnership and promoting the new headset, saying, “we are going through a once-in-a-lifetime change in how we work.”

Despite buy-in from some of the world’s biggest tech companies, many observers have raised doubts as to whether Zuckerberg’s vision is even possible. After the CEO recently posted a picture of his own avatar to his Facebook page, he was mocked ruthlessly by people who felt the image looked amateur. He quickly ordered up a more advanced version, and Meta is creating much more sophisticated looking avatars than the one Zuckerberg initially posted. For one thing, some of the new avatars have legs as Zuckerberg demoed them Tuesday — a notable change from previous ones that drew ridicule for looking like floating cartoon torsos.

Meta is building other technology besides headsets that will play into this vision. While some advances, like the full-color mixed reality and facial-tracking technology, are already available, a lot of the innovations are much further off. That category includes things like easy-to-use 3D scanning so people can photograph or take a video of personal items and quickly upload digital versions of those items to a virtual world. It also includes improved spatial audio so that conversations happening in the metaverse will have the same acoustic feel as those in real life.

The company is working on a wristband that can detect neurological signals in humans and turn those signals into outputs on a digital screen. The technology essentially turns the human hand into a remote control, a helpful tool when trying to operate a pair of smart glasses.

Zuckerberg demonstrated this technology to a group of reporters late last month from one of the company’s office buildings near Seattle. The wristband is bulky right now, he acknowledged, but eventually he thinks it will be stylish enough that people always wear it to control the devices around them.

“I think in the future people will use this to control their phones and computers and all this other stuff,” he said. “You’ll just have a little band around your wrist.”

The Quest Pro goes on sale starting Tuesday and Meta will begin shipping it on Oct. 25.