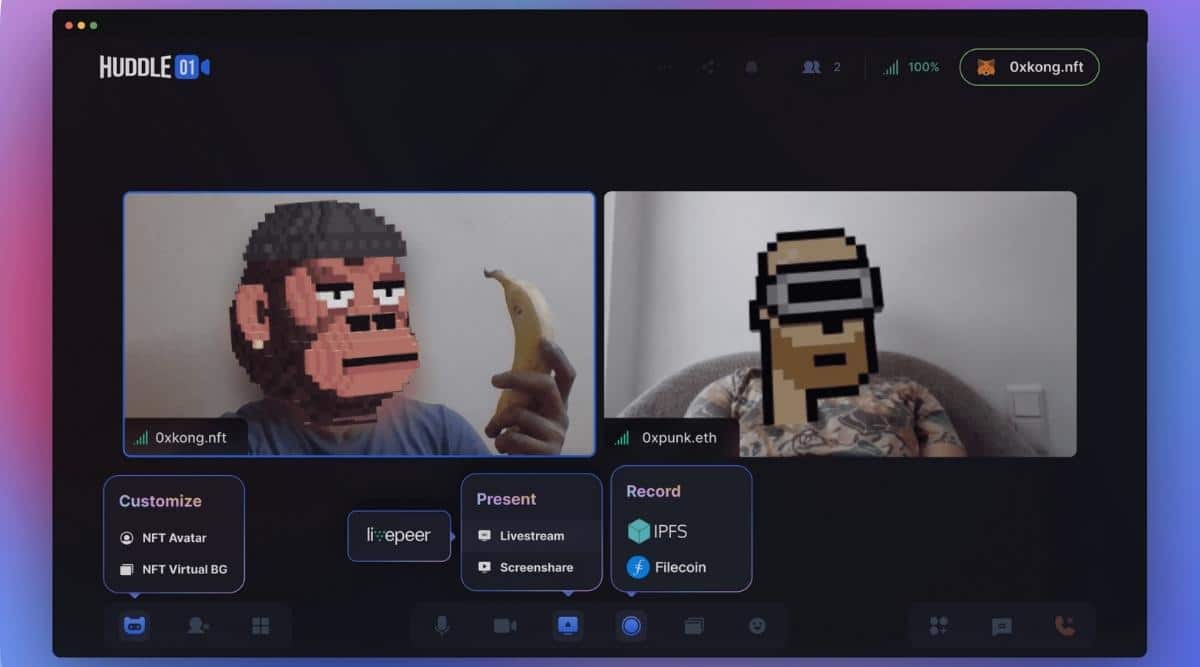 It’s been years since many of us said goodbye to our offices and started working from home. During this time, Zoom, Google Meet and Teams became integral to the way we stay connected. For people who want to remain anonymous on video calls and believe in the power of decentralisation, ‘Huddle01’ has become a go-to platform. This new Web3 Video meeting platform utilises crypto-native premises to create an immersive social experience on both web and mobile.

Web3 is a decentralised web that challenges the dominance of the tech giants by concentrating the power and data in the hands of the users, instead of the big tech corporations. This means that data is distributed across networks and no single entity owns the information.

“The idea was to make a video-conferencing application that is reliable, secure, and private for users. An app that would help users communicate irrespective of distance, device, and access to modern resources,” Ayush Ranjan, 27, co-founder and CEO of Huddle01 tells indianexpress.com.

Huddle01 was developed by two engineering students Ayush Ranjan and Susmit Lavania during COVID-19 when all the schools shut down and students were forced to attend online classes. “The major challenge for students was bandwidth, especially for students in tier-2 and tier-3 cities. Frequent lags had a deep impact on learning and understanding of students,” said Lavania, 25.

On Huddle01 users aren’t dependent on central servers to maintain the connection, rather you are connected to your nearest Host. In simpler words, the app is built on a peer-to-peer video conferencing solution, which means a direct connection is facilitated between two or more devices for audio and video data streams in real time.

Ranjan claimed that the latency of the app is reduced to one-fifth of server-based apps like Zoom, Google Meet, etc. In video conferencing, low latency means better video quality. The company has till date hosted 16,000+ meetings on Huddle01 with more than 250,000+ minutes of meetings.

According to Ranjan, Huddle01 is better than any centralised apps out there like Zoom or Google because it cares about your privacy which means that it doesn’t store any of your data, that’s why you can share anything with your friends. “No Log-In, No Sign-Up, just Huddle your way out.”

The app, however, has one popular way to log in, which is through linking your crypto wallet. “We use crypto wallets to identify unique users, which means we can only store a wallet address, and we pretty much can’t do anything with wallet addresses alone. Also, wallets are completely in the custody of their owners so we can’t access the wallets except for their wallet addresses,” said Lavania.

What makes Huddle01 special is that anyone can power a meeting. “If you are in a tier-2 city, it is natural for your network latency to be high, but what if someone from a different state, probably sitting in a metro city, powers your connection? This is possible only through Blockchain,” Ranjan explained.

The company plans to provide economic incentives through crypto to its users for powering the calls on its network.

For Web3 enthusiasts, Huddle01 has an in-built feature for those who want to show off their NFTs. “…we have a feature where once you connect your crypto wallet to Huddle01, we fetch your NFTs and you can choose your favourite collection as your display profile. We will soon be coming up with NFT AR filters to cover your face which maintains anonymity,” Lavania noted.

NFTs are not JPEGs anymore but a gateway to limited access to guilds, meetups, parties, and products. NFTs are one of the most expressive primitives in web3. And since web3 is community-powered, token-gated meetings become a crucial part of this.

In a few years, Huddle01 plans to move away from online meetings in a 2D screen box to more in a VR-based environment. “We actively do experiments with Oculus Quest 2 and plan to launch a beta product of how meetings can be done in VR. It will take a few years or roughly a decade to fully move away from the current tech stack of communications, but it will happen. A lot of innovation is happening in the user-end devices space to make it affordable for everyone,” added Ranjan.