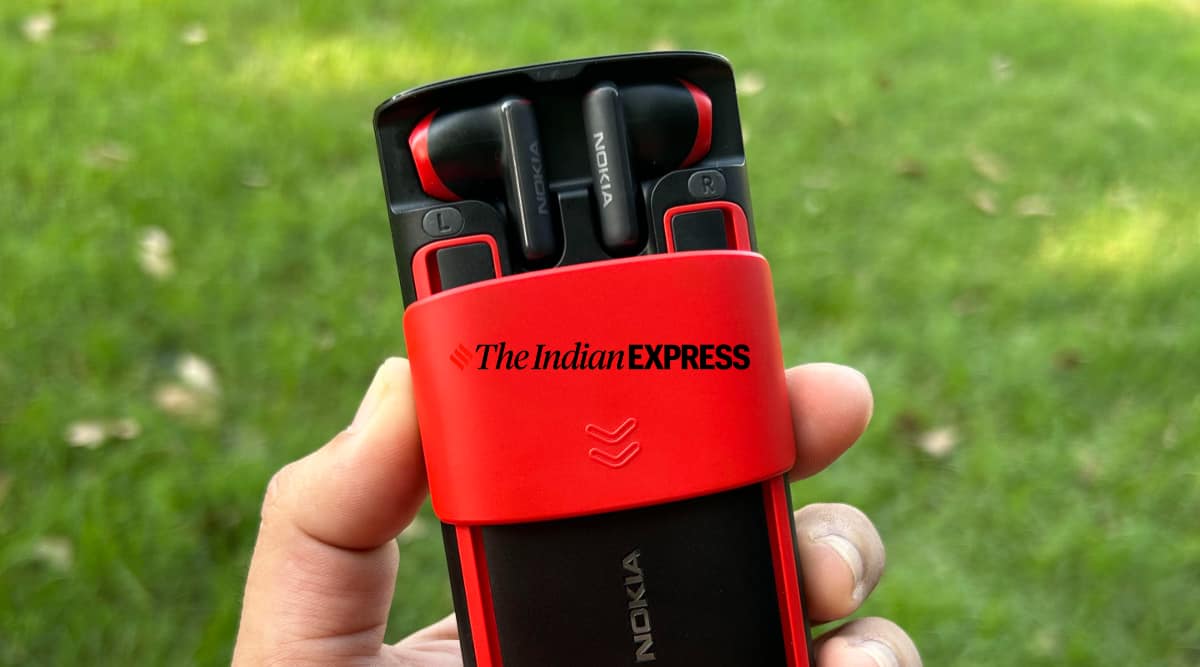 Lately, I am in this phase where I enjoy using devices that look like toys and have a “fun” element to them. My love and appreciation for unique phones began when a seller tried to sell me a Nokia Ngage “the taco phone” during the pandemic. Somehow, wacky designs are making a comeback. The new Nokia 5710 XpressAudio is a fun feature phone with the looks of the classic Nokia phone but with a slide-out panel in the back to house a pair of true wireless headphones. Yes, you read that right.

The Nokia 5710 Xpress Audio is a familiar phone. An ode to the classic Nokia 5700 XpressMusic which I had while growing up, this reimagined phone adopts a candy-bar form with a small (ish) screen measuring 2-inches and a classic T-9 keyboard resembling Nokia’s handsets of the past. However, the new Nokia 5710 doesn’t rotate like the original Nokia 5700. This all-black phone with red markings on the left and right will surely attract your attention. Given that this is a feature phone, the chances are the young generation will either love it or hate it.

The right edge houses three keys to control the music player and the satisfaction you get pressing these physical buttons is unmatched. I like the volume buttons on the left side which are large and easy to use. Undoubtedly, the Nokia 5710 has a clean and beautiful design. For me, the biggest draw for the Nokia 5710 was the form factor.

It’s small, although a little chubby, and fits in the palm of my hand. The device feels compact and light as a feather, reinforcing the toy aspect. It isn’t made of premium material, like smartphones of today, still it is extremely well-built. The plastic housing feels solid and satisfying. The black-and-red colour combo enhances the aesthetics of the phone and the patterned back cover adds more style.

I was disappointed to see no 3.5mm headphone jack on a music-centric phone like this but you do get Bluetooth 5.0 connectivity, meaning any wireless headphones can be paired with this. Around the back, there’s a dedicated charging compartment, which when slid reveals a pair of truly wireless earbuds. The microSD card and dual-SIM card slots are located under the battery cover. 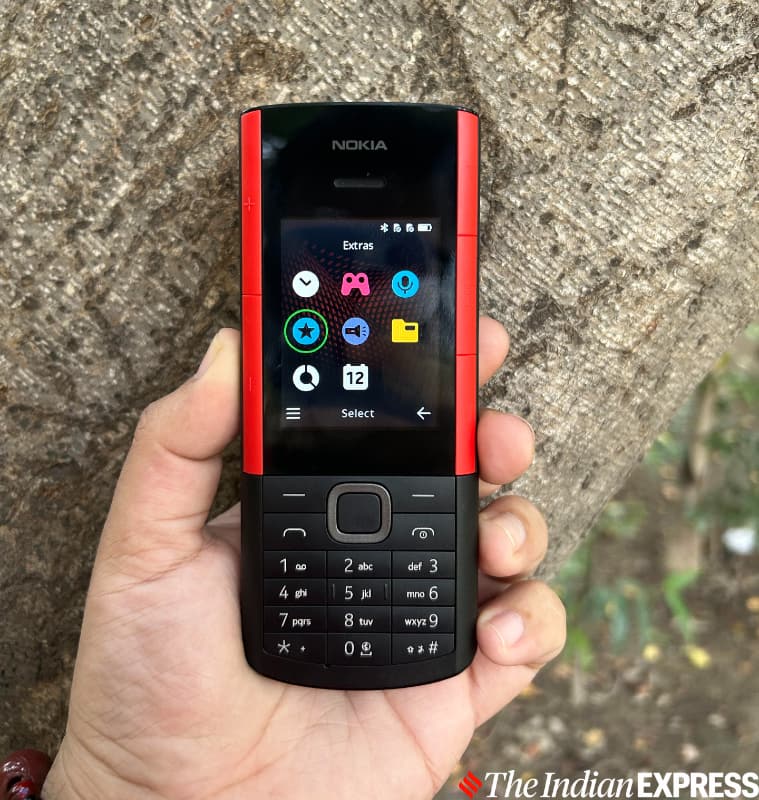 The micro-USB port on the bottom of the phone allows you to sync and copy files between the phone and PC, and the 0.3-megapixel camera lives on the back of the device.

The Nokia 5710’s most notable and unique feature is the sliding cover on the back of the device. I mean, the Nokia 5710 is defined by its audio features and the wireless earbuds slot adds a new dimension to the experience. The concept of a phone with a built-in slot for a pair of true wireless earbuds is fascinating. Just slide the slot on the back cover, remove TWS, and you are good to listen to the music. Once you are done listening to music, keep the buds back in the case, which by the way also charges your TWS.

For me, this is a completely new and refreshing way to use TWS. The best part is I no longer have to deal with the inconvenience of carrying a separate charging case which is an inseparable part of most true wireless earbuds. In fact, I had been using an Apple Watch band with a dedicated slot to hold my AirPods until I finally switched to the Nokia 5710 XA which natively comes with a pair of true wireless earbuds at no extra cost. 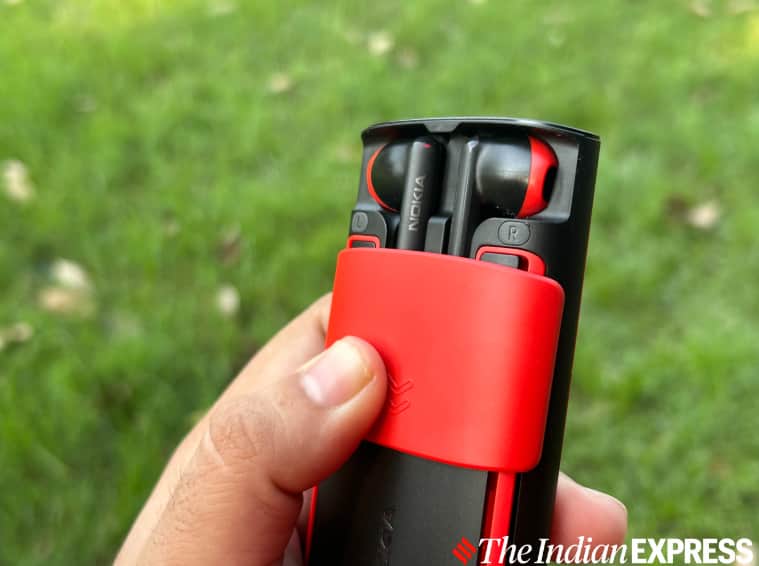 This feature differentiates the Nokia 5710 XA from just about everything else in the market. The earbuds have shorter stems and the buds stay in place. Like the phone itself, they come in a black and red finish. They are sleek and lightweight in design. One short press pauses and plays the music and double tap skips the track. I listened to music across a range of genres, and they sound surprisingly good which I wasn’t expecting initially. On a track like “Who says” by John Mayer, for instance, the Nokia buds give the vocals and guitar a new meaning. They have a mellow sound overall and the music is always balanced.

The battery life on the Nokia TWS is impressive if not great. On average, they hold about 4 hours per charge or about 2.4 hours of talk time. When the buds are in the case, they turn red indicating they are in charging mode. 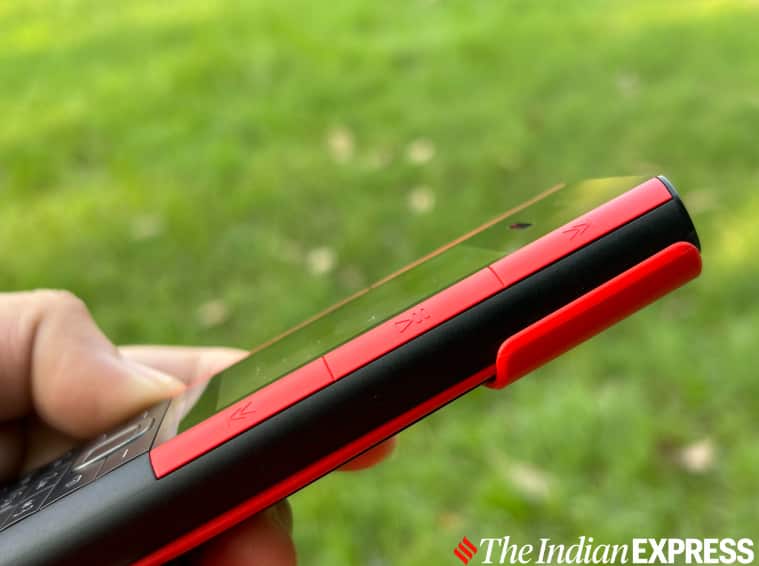 The Nokia 5710 XpressAudio is a music phone with dual speakers and external keys on the left and right side to control the music player. (Image credit: Anuj Bhatia/Indian Express)

It’s worth noting that there’s no way to customise the audio profile. Whenever I try to change the sound in the equaliser, I always get the message that “Bluetooth doesn’t support EQ”.  So you are always left with everything playing at default.

But I must say pairing them to the phone was seamless. I didn’t face any lag or latency issues either indoors or outdoors. HMD Global has even added native TWS support in the Symbian OS, the software that runs on the phone, which is commendable. I could see when the TWS are active, and how much battery each bud has at present, and there is even a lost-device tracking feature built-in.

To be clear, the included earbuds that come with the Nokia 5710 XA aren’t on the same level as premium TWS but they provide good value. And the best part, they come as part of the phone. So you don’t have to purchase them separately. 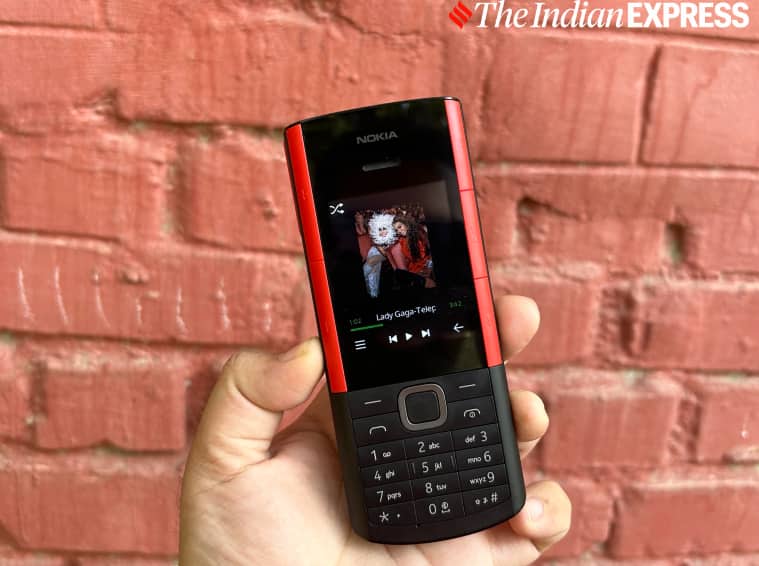 I like the simplicity of the Nokia 5710 XpressAudio. (Image credit: Anuj Bhatia/Indian Express)

In the age of music streaming apps, the Nokia 5710 XA feels like a vintage device. Before I began using the phone, I had to dig into my closet to find a USB-A cable, a spare microSD card and a Seagate external drive that had my favourite music of the early 2000s. I then transferred my entire music library from the hard drive to the PC and then onto the phone. The process took about an hour. The Nokia 5710 XA does not support Spotify or any other streaming app for that matter. This means you are limited to listening to wireless FM Radio or bringing your own music. 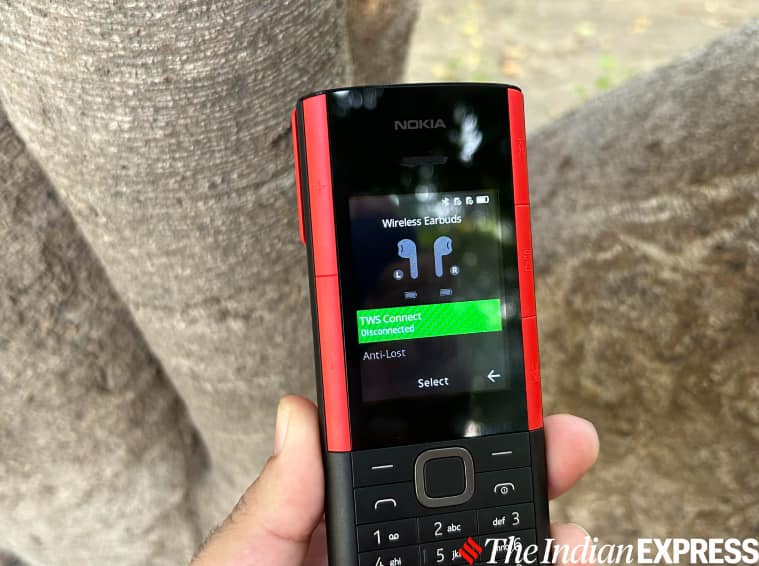 My experience of using the Nokia 5710 XpressAudio

The hardware and software of the Nokia 5710 XA may be old, but I enjoyed my time listening to music on this device. The interface is simple and finding music is easy, because everything is stored on the phone itself. When I want to focus on work, I listen to music on the Nokia 5710 XA. This is because there is nothing to do on this device other than music. A device like this helped me stay focused while enjoying music and attending calls when necessary at the same time. No annoying WhatsApp messages, or pop notifications distracting me in the middle of work. Should you buy the Nokia 5710 XpressAudio

In some ways, the Nokia 5710 XA is a breath of fresh air but at the same time, there are some real challenges in using a feature phone in 2022. I used the Nokia 5710 XA as a secondary phone, with my iPhone 14 still being the primary device. But even for a person like me who wants an alternative device, I won’t switch completely to a feature phone. No matter what we say about tech detox, we still need WhatsApp and super-fast connectivity on our devices.

But I love the thought behind Nokia 5710 XA and what it can do despite its limitations. The idea of integrating TWS with a phone is clever, the battery lasts for days, and its vintage design has plenty to love. This device is for nerds, retro phone collectors and really anyone who thinks the idea of ‘always connected’ is overrated. At Rs 4,999, Nokia 5710 XA feels like a high-end version of a feature phone. A little expensive to be honest, but it brings me a lot of joy and I think it might do the same for you too.