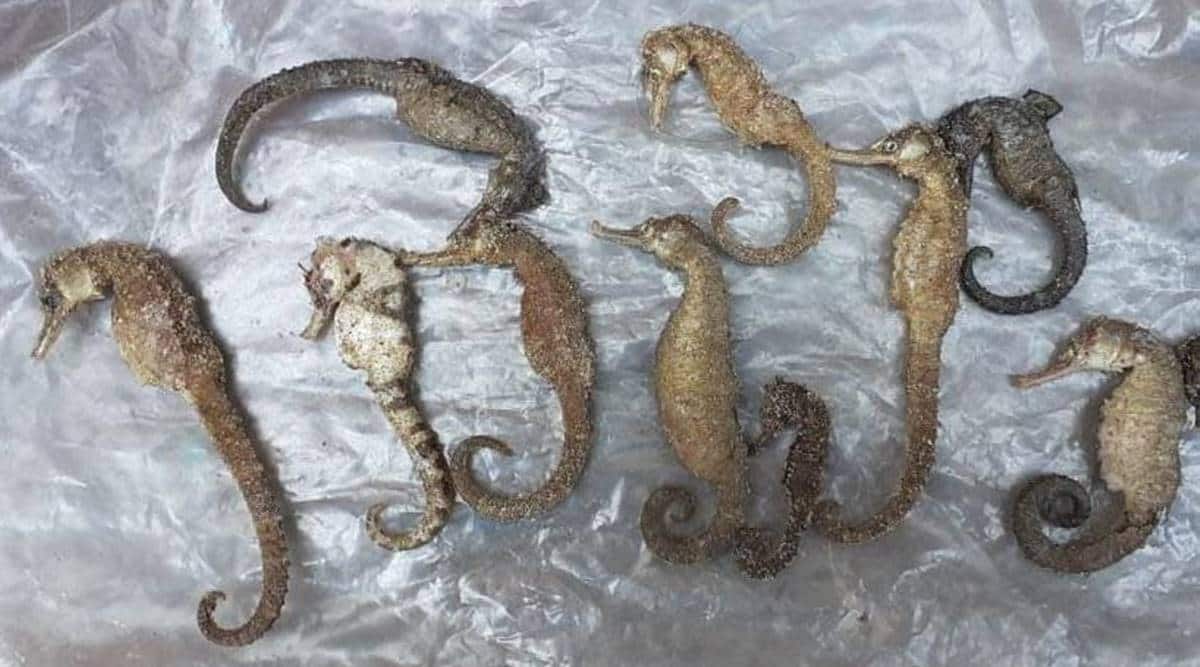 A study conducted by a Kerala-based scholar shows how seahorses are affected by commercial fishing in Palk Bay. Between August 2018 and July 2019 Shalu Kannan, a Ph.D. scholar at Kerala University of Fisheries and Ocean Studies (KUFOS) used to board between 10 and 15 mini-trawlers each month, looking for two threatened species of seahorses, Hippocampus kuda and H. trimaculatus, encountered as by-catch.

The study shows that these two species of seahorses are vulnerable to overfishing, and there is an urgent need to develop species-specific conservation guidelines and on-ground implementation.

The results were published last month in Marine and Freshwater Research.

Latest from my lab led by @ShaluKannan08 discusses the demographics of #threatened #seahorse species from Bay of Bengal revealing high vulnerability to overexploitation even as bycatchhttps://t.co/h8A5JrJLXR@CSIROPublishing @projectseahorse @IUCNSeahorse @CITES @AmandaVincent1 pic.twitter.com/XhMMbWdNq5

The spotted seahorse, H. kuda, and the three-spot seahorse, H. trimaculatus, are two widely distributed species having a life span of two to three years. Though both species are listed under Schedule I of the Indian Wildlife Protection Act (WLPA), 1972, they are heavily exploited because of their high value in the traditional Chinese medicine markets and the aquarium trade.

“Syngnathidae family (seahorse and pipefish) have the same protection given to tigers. There is a ban on all forms of their capture and trade from the country. But still, both species are currently listed as Vulnerable on the IUCN Red List, and their population is decreasing worldwide,” says Shalu.

“We have currently done a country-wide survey to understand if there is awareness among fishers. The results which are soon to be published show that fishers from Tamil Nadu have the highest awareness about seahorses. Though they know that they are a protected species, the clandestine trade continues. We urgently need to raise awareness about pipefish in our country,” she adds.

”Using mathematical models based on length-frequency of seahorse samples taken as bycatch, we estimated the mortality rates and exploitation levels and found that both species are facing extreme fishing pressure in the Palk Bay region. Such studies need to be undertaken in other locations along the east and west coast of India to better understand the fishing pressure of seahorses,” says K. Ranjeet, Associate Professor and Head, Department of Aquatic Environment Management, KUFOS who supervised the work in an email to indianexpress.com.

A paper published last year by an international team showed that between 4.98 and 13.64 million seahorses land as by-catch from India’s southeast coast every year.

“Though they are listed in Appendix II of the Convention on International Trade in Endangered Species of Wild Fauna and Flora (CITES), dried seahorses continue to be illegally exported from our country. Catching and marketing an animal listed in the Indian Wildlife Protection Act can invite both imprisonment and fine,” says Prof. Rajeev Raghavan, one of the authors from the Department of Fisheries Resource Management, KUFOS, Kochi.

“Restrictions of non-selective fishing gear such as trawl nets and small mesh-sized nets in the seashore habitats, coupled with habitat restoration are ways to restore the seahorse populations. The captive breeding and sea ranching of seahorses is yet another option, which is currently handicapped by the regulations in the collection. Regular monitoring of seahorse fisheries and trade and enhanced awareness among fishers are other options in management,” says Dr. A. Biju Kumar, Professor, and Head, Dept. of Aquatic Biology & Fisheries from the University of Kerala who was not involved in the work.